I think I may have purchased this roving even before I bought my wheel?  I’ve been trying to save it until I’m a better spinner, but, well, I clearly have no self-control.  I confess, I regularly cruise the Three Waters Farm Etsy shop and drool over her beautiful colorways.  T his is the only one I’ve purchased so far, but let me tell you, it is a total gateway purchase.  The combination of Blueface Leicester wool and her rich dyeing techniques creates an almost pearlized luminescence in the final roving and the fiber is a joy to spin.

Singles all spun up: 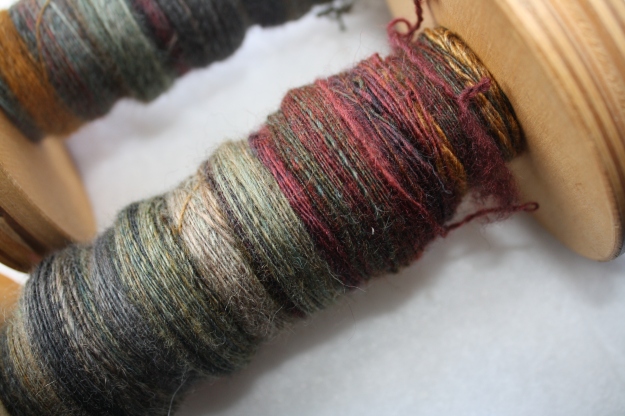 I’m still very new to spinning, so while I tried to spin this semi-woolen with a long draw, I think it kind of turned into a medium-to-long draw.  Either way, it was very pleasant going and it’s by far the best yardage that I’ve achieved…..Around 360 yards of a DK-ish weight from the 4oz bump.  For me that is three times better than anything thus far.  It’s still super uneven, but I’ll take what I can get!

Plying still seems to vex me.  I see all these beautifully plump, tightly plied finished skeins posted, but mine just never seem to turn out that way….I’m sure it has everything to do with the uneven texture of my singles, because it seems that fatter pieces are the ones to end up more loosely plied than I would like.  I’ve tried putting more spin into them, but then they wind up overplied and twisty.  Oh well, I reckon I need to buck up and find a spinning class. 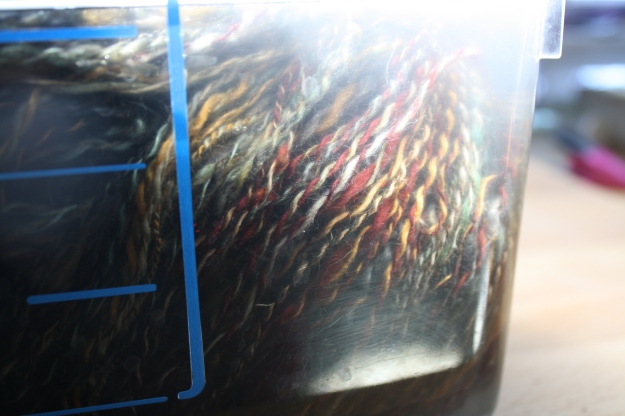 This is Piper’s Journey designed by Paula Emons-Fuessle of the Knitting Pipeline podcast.  I’ve been wanting to knit this since it came out, and while I don’t technically have enough of this handspun, Paula’s design is easily adaptable to differing weights/yardages.